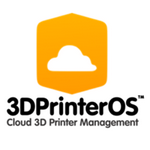 Updated 2 years ago by Andrew

The new smart system automatically defines what printer and slicer is user going to use in 3DPrinterOS built-in apps.

How did we do?

(opens in a new tab)